Lindquist Mortuaries started with a call from Brigham Young

150 years ago this year, Nils Lindquist was called by Brigham Young to settle in Logan and to also add “Undertaker” to his occupation. He was a fine furniture maker from Sweden, and personally built every piece in the Beehive House “Mother’s room.” The story goes that when Nils received the call he said, “I’m not an undertaker,” but Brigham Young replied, “You are now.” So in 1867, Lindquist Mortuaries were founded, making Lindquist not only the oldest but also the largest Mortuary company in Utah.

In a candid interview at their office this week, John E. Lindquist and son McClain Lindquist discussed heritage, their secret recipe for family business, and what is on the horizon. The Lindquist companies currently employ 250 people in the greater Weber/Davis county area, but few realize they have another 10,000 employees nationwide as part of Great Western insurance, their cemeteries and mortuaries.

In addition to the Lindquist side of their family, they also celebrate pioneer heritage and an entrepreneurial spirit from their maternal line. They are descended from Matthew Sandefur Browning—John M. Browning’s only full brother. It is interesting to note that while John M. Browning is rightfully famous for his inventing, Matthew’s role also was critical because he ran all the businesses, freeing John M. to invent. Matthew and held some gun patents of his own. “The two were not only brothers, but best friends. They did everything together. They were very, very tight” John E. Lindquist said.

John E. and McClain then rattled off 5 generations of their genealogy without consulting notes, showing (rather than telling) how important family is to them.

Perhaps their pioneer heritage was one reason John E. Lindquist’s  parents, John Aaron Lindquist and his wife Telitha, chose to schedule the annual concert and fireworks during Pioneer Days. The 39th annual Lindquist Family Symphony Pops Concert and Fireworks will be held this Sunday, July 16th at 9 pm at Weber State University.

This community event began when John E.’s parents were involved with the Ogden Symphony and Ballet Association, and wanted to get young people interested in music. They knew if they held a free concert with an orchestra, nobody would come. They hatched the idea of fireworks and the community loved it. Several years later, John E. took over the logistics.

McClain describes the pops concert as being “As big a deal as Christmas and Easter for our family. It’s a reunion.” He added, “Some of my best memories are at the fireworks. Now I share my grandparents’ deep love of music and art. That probably started there and our family especially loves local artists, musicians, painters and writers.” McClain always enjoys when people from the community thank them for hosting it. He then made this commitment, “The pops concert will continue for as long as we are in the community. It's part of our DNA.”

It's the Right Thing To Do

Giving back is, indeed, one of their family’s core values. When asked what he has learned from working with his parents and grandparents, McClain does not hesitate to say, “I learned that we give back to this community that has been so good to us. We are taught to give not only financially but of our time. I intend to pass that on to the next generation.” He also shared that he was impressed to realize that his parents and grandparents did much of their philanthropy anonymously and without fanfare because, “it was the right thing to do.”

The father-son duo then discussed family business, and John E.’s insights were like a master course on this subject. He shared this, “I have seen literally hundreds of family businesses. Those that work and those that don’t make it. I have come to the conclusion that the older family member has the responsibility to get things to work, not the younger one. The older one has to give and keep moving out of the way and to lead. He or she controls that emotion.” With his trademark humor John E. jokes that, “I taught my dad everything he knew, and the younger generation is never very bright. A little bit slow.” When pressed, however, his tone turned thoughtful, “My father was a great teacher and a great leader. He demonstrated these things.”

McClain added, “Grandpa spoke volumes without saying a lot of words. It was real-time action and not just words…Unless it was talking about Ogden. He was a historian and loved Ogden, which is another thing embedded early in me.”

John E. noted that he has always worked 10 to 12 hours a day and has very few regrets, and is quick to give, “They had a great mother who took care of that side of it. I was free to work and learn.”

John E. went on to paint the scope of family involvement, listing a half dozen family members currently working in their three businesses: Lindquist Mortuaries, Great Western Insurance, and Lindquist Memorial Parks. He noted that in every generation, there is usually one family member who emerges as the leader while others do not wish to take on that role. “The problem arises if you have two or three fighting for the same spot. That has just never been the case in our family. I have worked with my father, uncles, brothers, cousins and now sons. We have never had problems.”

McClain gave his take on family business, “The next generation should swallow their ego. Rely on expertise of those who have been doing this longer than you have been alive. It can be hard because we have different opinions and philosophies. But a good businessperson will listen to advice.” McClain offered his goal for the future, “Family is really important to me. With my time here, I want to ensure that the business can support five more generations. The more the merrier as far as family coming in. We don’t always see eye to eye, but we come together for the collective good of the company.”

In 1983 John E. saw a need to provide families with a better way to make funeral arrangements in advance, through a true insurance product. Great Western Insurance became the first company to fill this need in the country, providing not only peace of mind in advance but a less stressful experience during a family’s time of grief. McClain said that this can be an uncomfortable topic, “Nobody likes to talk about their own death.” Knowing that once these decisions have been made, and the expenses covered “at today’s prices” can free a family to focus on their grieving process. John E. noted that in their line of work, they talk about death a lot, but feels this gives them a healthy perspective on life, that none of us will live forever.

Another tidbit for history buffs is that his grandfather was the best of friends with David O. McKay, who dedicated the Ogden Mortuary, and spoke at his funeral.

McClain further discussed how the funeral home business is changing. “Baby Boomers want a different experience.” He still sees value in a traditional funeral because each aspect has evolved to help with stages of loss. “I believe in what we do, viewings, services, and a celebration. I’m a bit torn because we will be innovative, yet I never want to take away from the traditions.” Even so, he intends to lead out with unique services for families to honor their loved ones. The trend is toward life celebrations and memorials that focus on storytelling, photos, and even objects to evoke memories.

There is also a shift toward cremation, which they do. John E. was quick to dispel one myth, “We will never run out of cemetery space in this country. There will always be room.” He shared another perspective, “Once land is a cemetery it will never be something else. One might be closed for various reasons, but they always remain, creating permanent, open green space.” 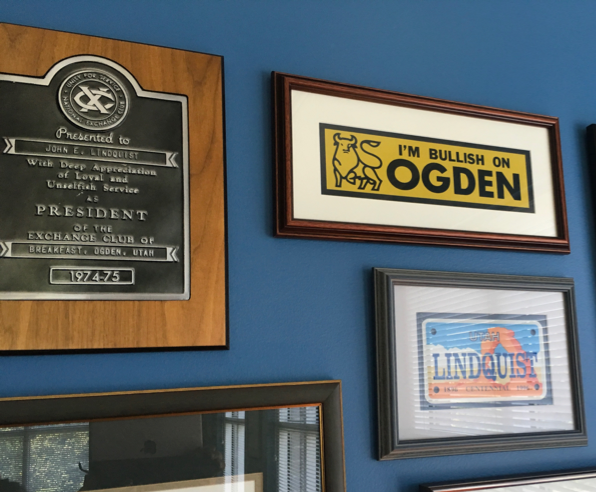 Speaking more generally about our community, McClain said, “I am optimistic about Ogden. I always see Ogden as on the incline, and have my entire life. I always see us on the slope up.” He then pointed a sign framed on John E.’s office wall, taken from his Grandfather’s office and he said these words, “I’m bullish on Ogden.”

Editor’s note: This article refers to John E. Lindquist and McClain Lindquist by their first names for clarity, although typical protocol would dictate using last names. All respect is intended.